Of melodies pure and true

Fuzzy birds - no camera but my phone: 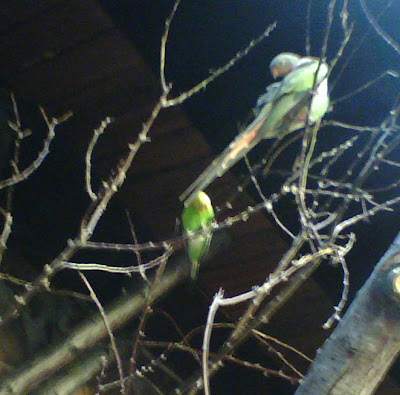 Our local zoo tries, tries hard. Regretably, there's not much you can do at this altitude and zone but they've really done much to move beyond the conrete slab/metal cage presentation of animals and although the selection is not that diverse, at least it's not a circus.

The newest display involves free-flying birds, parrots and parakeets and all those kinds of animals (as you saw in the first pic) that may or may not be eager to eat you shit-on-a-stick. Zeke lucked out (as usual), some large tufted bird landed on his head then crawled down his arm to eventually sit on his finger. I wish I had pics of all that but I was busy assuring him that the bird wouldn't peck his brains out, showing him how to put his finger out as a perch, watching the light in his eyes flash as he held the bird on his finger 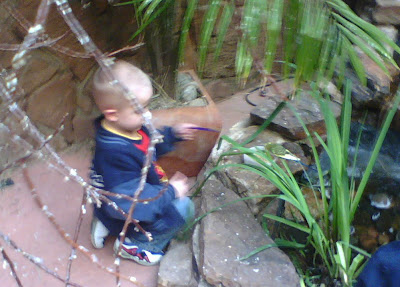 The girls weren't as lucky, no birds landing on them much less looking for a seed stick. Nonetheless, they found some willing beaks: 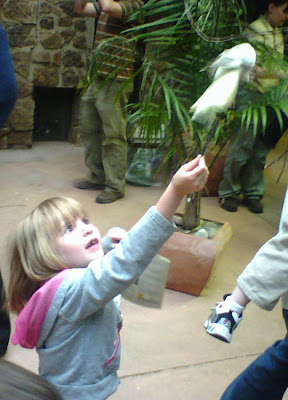 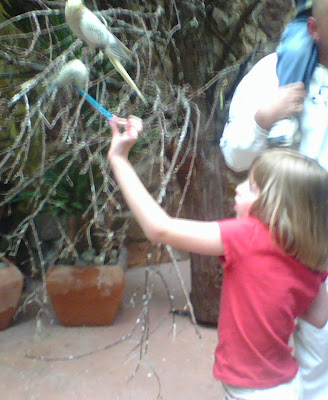 And at the end of it, I took three very tired children home to reflect on what they'd experienced, where they'd been and of course, they just wanted to eat and go to bed. However, the proof is in the eternity because, at the end of this day, they're still talking about their experience whereas I'm wondering how I'm going to get my struts replaced.

We Eights it, it burns us….

The first rule of the game is to post the rules of the game. Here they are:

* Each player starts with eight random facts/habits about themselves.
* People who are tagged need to write posts in their own blog about their eight things and post these rules.
* At the end of your blog, you need to choose eight people to get tagged and list their names.
As the world’s worst blogger, I shouldn’t have to explain one damn thing but I will because, hey, I’m the world’s worst blogger and the half-assed excuses for my half-assed life make for some compelling reading. That is, if you’re here because you’re done reading the back of the soup can.

One of the reasons I haven’t been writing much (aside from not having much other than, “Got up and after I discovered I had to pee, realized I hate to iron!”) is that it’s Spring and the Garden and the lawn calls. Flowers and vegetables to be planted, plots to be rearranged, rocks to be hauled and holes to be dug. Once the hint that Winter was edging towards the past tense, I’ve been ripping out the old and deciding how the new should be arranged, accepting that a hard freeze is part of a Rocky Mountain Spring.

This is all done at my parent’s house, BTW. My own place is owned by tweakers, my yard full of boxes of dead printer parts and bricks.
Tomorrow I’ll give you (both of you) a pictorial tour of the work or work-in-progress – I wish I’d had the foresight to do before/after but thank God I didn’t – and you can see my hand hasn’t been idle, in service of the devil, and far too dirty to, well, you know.

Until then, I need to acknowledge those who have acknowledged me. The first be the Fabulous Kim (and this is WAY overdue – I’m such a schmuck) for nominating me and writing REALLY nice things about me for a Thinking Blogger award. She said:

Nino the Mindboggler at Patriside. If only everyone could write like this man... It's impossible not to mull over his thoughts, go ahead, go see for yourself.

Which is a bit like Carson McCullers throwing a bone to a drooling undergrad. I appreciate the award and the kudos. I'll eventfully put that button up when the Zero Boss awards me the $50 Amazon certificate I was supposed to get back in March (what a good month for me!). Kind of cynical on buttons, I guess.

And on top of that, I need to acknowledge the magnificent MizMell and the hurt she just put on me for this meme thing. Less a meme and more a game, so let's play...

The first rule of the game is to post the rules of the game. Here they are:

* Each player starts with eight random facts/habits about themselves.
* People who are tagged need to write posts in their own blog about their eight things and post these rules.
* At the end of your blog, you need to choose eight people to get tagged and list their names.

I'll email all these folks but I expect a 25% return rate so I leave it to you to wonder WTF happened... cheers!
Posted by Puck at 5/18/2007 10:03:00 PM 6 comments:
Email ThisBlogThis!Share to TwitterShare to FacebookShare to Pinterest

To all you mothers – I hope your day was full of laughter and burnt French Toast and May flowers. I would have written my own tribute to you mothers but I had my own mothers to contend with, tributes and tribulations.

There’s been a lot distracting me lately, the least of which is my parent’s yard and my urge to make it pretty. Pics to be provided this weekend. There’s a lot more to say but I dunna’ wanna’ jinx it, y’know. I’m a bit superstitious with that and for good reason.

Until then, it’s Saturday as far as I’m concerned; I’ll take players until June 15, disks to arrive by June 27 and then, by July 1 – post your life story.

Another Mixmania! …and another explanation from me (Ho Hum, hmmmm…)

Starting with the next theme (with a nod to the fab-a-lust ~D), I’m asking “What is your life story?”

I know that several of you will be inclined to make multiple disks (the always stellar Mamacita made SIX DISKS last mix!) but I’m putting a two-disk moratorium on this one: narrow down what you want to say about your life into two disks – then WRITE about what sits within the segues, describe the rocks in your streams, each and every rock’s tint, no matter what the stream said then and what it says now.

The stream has been muddy and swift lately; my babies punch me in the stomach like little ninjas in Pooh pajamas. Whenever we go to the park, they’re down at the stream and I’m there behind them, watching, reminding them that whatever goes into the creek changes it forever. Hoping none of them will go into the creek for their, mine, or the water’s life story.

We don’t have tornadoes here but that doesn’t mean random death doesn’t spin this way and that those of us tucked within tall rocks aren’t stuffed safely between the mounds of infinite bosom; remember Columbine.

Whatever dropped into the stream will be fine; rocks, sticks, bodies, dredge whatever’s there and paint it onto 48 songs or so. Something, anything – tell us who you are.
Posted by Puck at 5/08/2007 09:11:00 PM 10 comments:
Email ThisBlogThis!Share to TwitterShare to FacebookShare to Pinterest
Newer Posts Older Posts Home
Subscribe to: Posts (Atom)